While I was in Chicago with my daughter, Courtney, we debated whether to visit the Museum of Modern Art or the Art Institute of Chicago. We would only be there for two days so if we wanted to see the city, we could only take time for one museum. We had to decide.

I chose the Art Institute of Chicago as soon as I realized they had several works by Cezanne. I have been studying his work lately and find it to be very intriguing. I knew this to be the right decision because after talking with some of the museum staff, we discovered they also have 6-8 John Singer Sargent Paintings on display.

That would be AMAZING! I have love, love, loved John Singer Sargent's work for like FOREVER! He was known for his ability to sketch with paint and the result was much like a finished work of art. This created some jealousy among his peers. Madam X, pictured below in its three different forms, was one of his most notorious pieces.

I first saw Madam X at the Seattle Art Museum and was intrigued and in awe by Sargent's ability to create such a perfect painting. It was so long ago, and I actually think I saw the first version of this piece with the shoulder strap down. Madam X was not one of my favorite paintings but it had an impact on me because of the story and disapproval the painting received. I was surprised it didn't get great reviews. It is a pretty impressive work of art.

This painting was considered a scandalous entry when it was debuted at the Paris Salon of 1884 and originally was painted with one strap sliding off her shoulder. The reviews were terrible and consequently humiliated the subject, Virginie Amélie Avegno Gautreau, who was a beautiful socialite in Paris society who used her femininity to advance her position and status. Although Madame Gautreau was famed for her infidelities, the scandal of the painting's reception did not work in her favor.

Eventually two other artists painted portraits of her that were similar in style, yet not nearly as dramatic, and were very well received by the art critics and the public. John Singer Sargent gave up his dream of becoming a famed portrait painter of Paris and moved to London where he continued to paint amazing portraits and became famed for this ability, despite the negative experience in Paris.

Since that long ago viewing and until this trip, I was only able to see John Singer Sargent's work through the internet and books.

Shortly after entering the Art Institute of Chicago, it became clear that it would take more than a week to explore all the art available for viewing.

We decided we had to pick up the pace and get moving if we were going to see the Singer Sargents... and a Cezanne... Dali... O'Keefe... Gauguin... Monet... Wood... Hokusai... oh Art Institute of Chicago you attention hog! 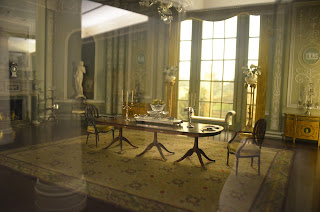 This realization came after we spent a large amount of our time being amazed by the 68 piece Thorne Miniature Rooms Collection where Mrs. James Ward Thorne of Chicago constructed perfect miniature historical period rooms between 1932 and 1940 and where one foot equals one inch in scale, display after display amazed us both. (Yes, that is the Montgomery Ward family connection.) Mrs. Thorne directed the most talented craftsmen/women on every aspect of each display. 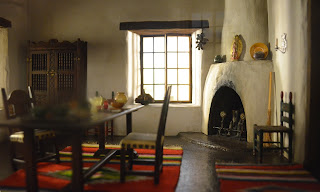 The amount of detail in each work was really accurate from the dishes on the shelves to the weave of the braided or Persian carpets to the teeny tiny toys scattered on the floor where children would have played had they been Lilliputians.

The rest of our visit seemed like a mad dash to the finish. There were complete buildings we didn't have time to explore on the campus. Next time.

Following are the paintings that I was so happy to see in person. I was surprised by the fact that we were allowed to take pictures of these paintings and that on more than one occasion, I was able to step right up and stand inches away from these great works.

These are the highlights: 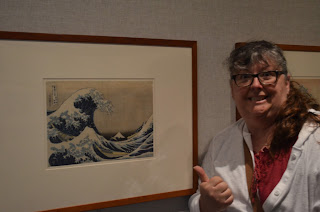 Master printmaker Hokusai's Great Wave at Kanagawa is a stunning print and one of my son, Benjamin's favorites so, of course, I had to get a photo... or two. (Look how close I am to the art. I am feeling like someone should have run over and scolded me.)

Although Claude Monet is not my favorite artist, the Art Institute of Chicago has an impressive collection. The Haystack series is pretty interesting because it is several paintings of the same thing. Monet repeated his subject matter over and over.

While wandering through the different rooms, for a moment, I thought we had walked into the same gallery we had just been in, because I was seeing the lilies again. The Art Institute had... 30 or more Monets. 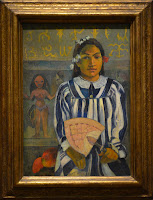 Tehamana Has Many Ancestors, 1893, by Paul Gauguin is a beautiful painting. I love everything about it. The design of the background, the uncomfortable pose, the striped dress, the lighting.

In 2012, before I went to Denmark I saw an extensive showing of Gauguin's work at the Seattle Art Museum. It was really a beautiful display of his many talents as an artist, printmaker, and carver.

When I visited the Glyptotek across from Tivoli Gardens in Copenhagen, the woman said it was a shame I hadn't come at a different time because their extensive Gauguin Collection was in Seattle. 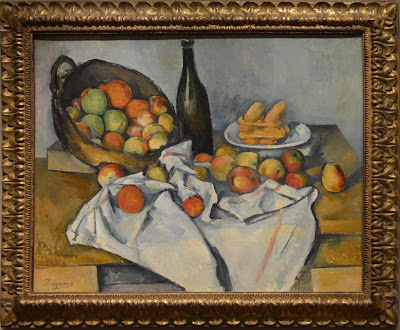 Paul Cezanne is another favorite that I am just now discovering. Seeing The Basket of Apples, 1893, was a kind of a thrill, I have to admit. I was totally an art nerd and Courtney just laughed as we discovered new treasures around every corner.

Van Gogh's Grapes, Lemons, Pear, and Apples, 1887 is one I have not seen before. I think that most of the time, the famed painters of the past have a handful of art they are known for, but when you dig deeper, you find treasures that surprise. With Van Gogh we are so used to seeing the self-portraits and the brighter colored works. 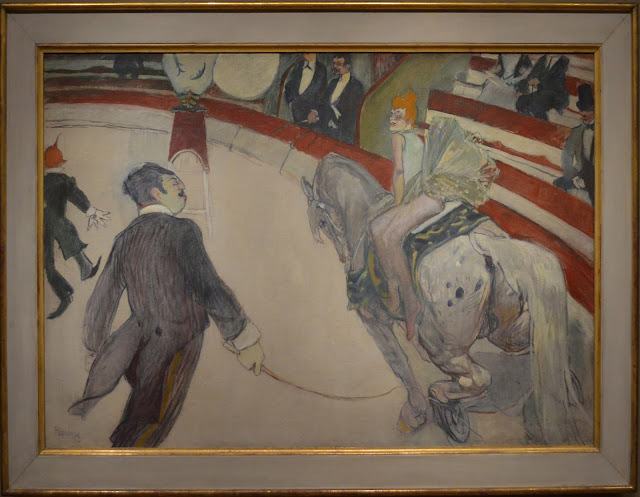 Okay, finally, the reason for this post: John Singer Sargent and what I love about his artwork. 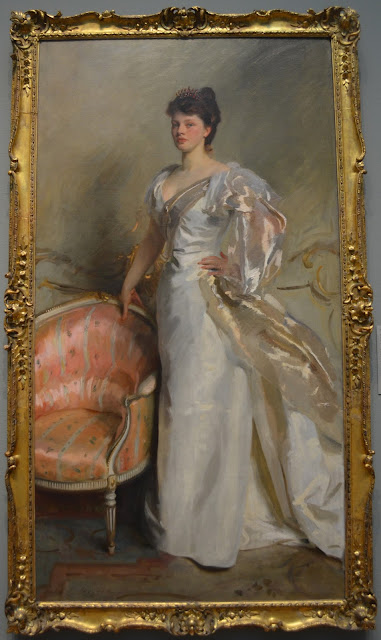 First of all, his skin tones are beautiful. He puts the delicate pinks in the right places and highlights are subtle but add a richness and reality to the subjects features.

When he paints the hands, Sargent uses just a few strokes and the hands look natural and realistic, but when close up, I see the strokes and the changes are just varying hues of light and dark.

The fabric is masterful. He has an amazing ability to capture the light and shadow and nature of certain fabrics and how they bend. Also, the satin and taffeta are reflecting perfectly where the cloth rises and folds. The sheer quality of the left sleeve is lovely. Up close it looks like a jumble of paint strokes.

Mrs. George Swinton was huge, over 90 inches high. I loved seeing this painting in person.

I took many many more pictures at this museum and, as you know, I can go on and on about these artsy experiences.

So I will wrap this up and say that I am thankful my daughter brought me along on this impromptu trip to Iowa and I loved it that we somehow ended up in Chicago. I saw 6 paintings of my favorite painter and so much more.