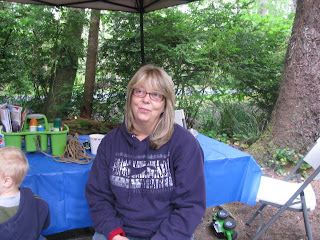 Once upon a time, I wrote a blog post about my mom's best friend, Joanne Prokop.

You can find the post, A Kinder Kidney, in the December/2012 folder. I wrote about Joanne's struggle to find a kidney donor. She has Polycystic Kidney Disease and has been waiting to find a match with a donor.

Good News! After four long years of waiting... a match has been found and Joanne goes in for transplant surgery tomorrow to replace her failing kidneys.

Please keep her and her family in prayers and positive thoughts as she begins the new chapter of her life with a healthy kidney.

An update to the update: Joanne has been recovering very quickly after her kidney transplant. It was very nice to see her and know she is doing well.

While I write this blog post, I hear the tinny circus music of the ice cream truck becoming louder as it drives up my lane for what will most likely be the last time of the season. Lightning storms will motivate them to pack their goods in deep freeze for the winter. I can't help but think back to the time when I was a child and I don't think there was an ice cream truck anywhere in the wild corners of Mendocino County.

I have a few scattered memories of my early school days spent in the hills of Northern California, outside  the small community of Hopland, where we lived in the old Riverbend Hotel and Stage Stop; it was quite the pale pink monolith rising up from the side of scenic Highway 101 just north of Frog Woman Rock* (Until 2011, known as "Squaw Rock") where the legend of star-crossed lovers was memorialized on a boulder off the highway with a little extended real estate that no one ever seemed to use for anything other than a turnaround.

Our home was a three- storey dwelling that had a great deal of potential as a restoration project... of course I didn't know this when I was 6 years old. HGTV was nowhere in sight in 1966. However, I can look back in my mind and see the old construction and all the possibilities that were present and I find I am very fond of the memory of that house.

In the neighborhood of our hotel, there were four houses. The DeMarcantonios' were the wealthy wine farmers who lived on top of the cliff behind our house. The very steep road that lead up to their mansion was narrow and on the left, the yellow hills climbed in tandem with the road, but to the right, I imagined the earth falling away to what seemed like miles of nothing to the nearly dry, Pieta Creek.

Once, while on a walk with my parents, I remember following my older siblings out into the tall wheat-colored grass, when Dad called us back we all ran at top speed. My brother and sister made it back safely to our parents, but as I neared the road the downhill slope gave me increased speed and I didn't know how to put the breaks on my legs. Lucky for me, Dad could run faster and we met in the middle of the road, him scooping me up into the safety of his arms before I reached the cliff side.

At the top of this mighty mountain was the castle... the fortress of the DeMarcantonio wine family, (in retrospect, this home was a Spanish style rambler.) They were the richest people we knew, evidenced by the dog named Queenie and a dish that sat on their coffee table all the time and was always magically filled with candy.

From the perch overlooking the valley, the DeMarcantonio family looked down upon us in our three-storey home and and also saw the goings-on at my grandparents' dwelling situated a bit north along the highway. A little further up on this bank of structures was Grandpa's store, Jensen's Rock Shop and Metal Arts, which was packed floor to ceiling with knick-knacks and shells and rocks and all kinds of stuff.

Ethel and Carl Jensen, my grandparents pictured to the left below, lived in the front of an abandoned gas station. The room was very small and split down the middle by a beautiful wrought iron screen that my grandmother covered in fabric and used to divide the space into a kitchen-dining-music-study-living room and a bedroom-bathroom-closet.

The bedroom-bathroom-closet was fascinating. Their double bed took up the bulk of the room, leaving a little space for a dresser. The closet was the only thing in the space that was actually used as intended... it housed clothes, but it also was utilized as the bathroom and when you moved the clothes aside, there was a coffee can that doubled as a chamber pot.

The coffee can/chamber pot was the convenience because there was a bathroom that could be accessed by turning left outside Grandma's door, through the tunnel-like variegated metal-roofed workshop of my Grandpa's metal arts business, out the end door, down the staircase to the ground, and then wind your way around the green metal door of the cinderblock construction that was the public restroom of the original gas station.

It was a hike during the day, but at night... it was beyond scary to make that trek with a flashlight held in a shaky hand that made the situation worse by creating threatening, animated shadows from the stacks of metal and junk that would later be repurposed into art with form and function but that in the meantime, just looked like monsters ready to be awakened, hence the conveniently placed coffee-can-in-the-closet trick.

The fourth home in our little roadside community was a place I never visited but was inhabited by a man I never saw but heard stories about him from my Grandpa and Dad. The tales of "Mr. Davis" only served to make him seem like the "troll under the bridge."

Mr. Davis– not his real name but the marker I hold in my memory when my mother is not present to correct me– was known for killing deer and not using the meat, which for my parents and grandparents who lived the struggle to keep food on the table, could not stomach such waste.

Whenever we saw the black shadow of the vultures, they seemed to glide ominously above the mysterious Davis' property and the rumors always came back to the same theme: "if you end up on the Davis land, he will shoot to kill."

These were the people who made up the human inhabitants of our neighborhood.

In our old hotel, we housed many "non-human" residents. Most notably, hundreds and hundreds of bats.

At dusk, we would call out to the bats in the attic, sending them in a big black wave off into the sunset. This was our evening ritual.

Sometimes, in the middle of the night, Dad would jump around the room using a broom like a Louisville Slugger, swinging it through the air to knock a stray bat out of the ball park... or the window or possibly scare it back into the light fixture it crawled into from the attic. However it got into our room, it never ended happily for the bat, much to my sister's distress.

Debra is an Animal Rights Activist and when I think back to her reaction to animals dying, whether by cars on the highway, butchers who make house calls or by relatives ridding our home of pests, she did not tolerate this well at all. There were always tears and the end result was that the three of us spent some time attending funerals for any number of creatures big and small.

An unwelcome group of inhabitants were the bees. I remember my grandfather, Jeff Bradshaw, dressed in his big white beekeepers suit as he carried away a giant nest of honey bees that lived in the back corner of the roof. I could say he looked like an astronaut (if I knew that was a career option prior to 1968) as the flying trail of bees followed him and their home to his old white pickup.

In the basement, the ground floor, we were very careful to check for Rattlers and black widows before exploring some of the darker corners as there were no steps up to a foundation. In these dark corners with dirt under our feet and cobwebs overhead, we found shelves of ancient mason jars filled with well preserved pickles and fruit. It looked like an abandoned laboratory to me and these were relics that were never disturbed.

My all-time favorite interlopers were the snowy owls that hooted from the tree near our third-story bedroom window. While reading bedtime stories from books my grandmother loved, she would pause and encourage us to go to the window and say "goodnight" to the owls.

Grandma's bedtime stories were the very best. The Wind in the Willows, Mother Goose and The Tail of Peter Rabbit were my favorites. After the story and the goodnight hugs and kisses, Grandma would tuck us into bed, turn out the light and leave us to our slumber with the snowy white owls gently who-who-ing us to sleep. It was the best of times. 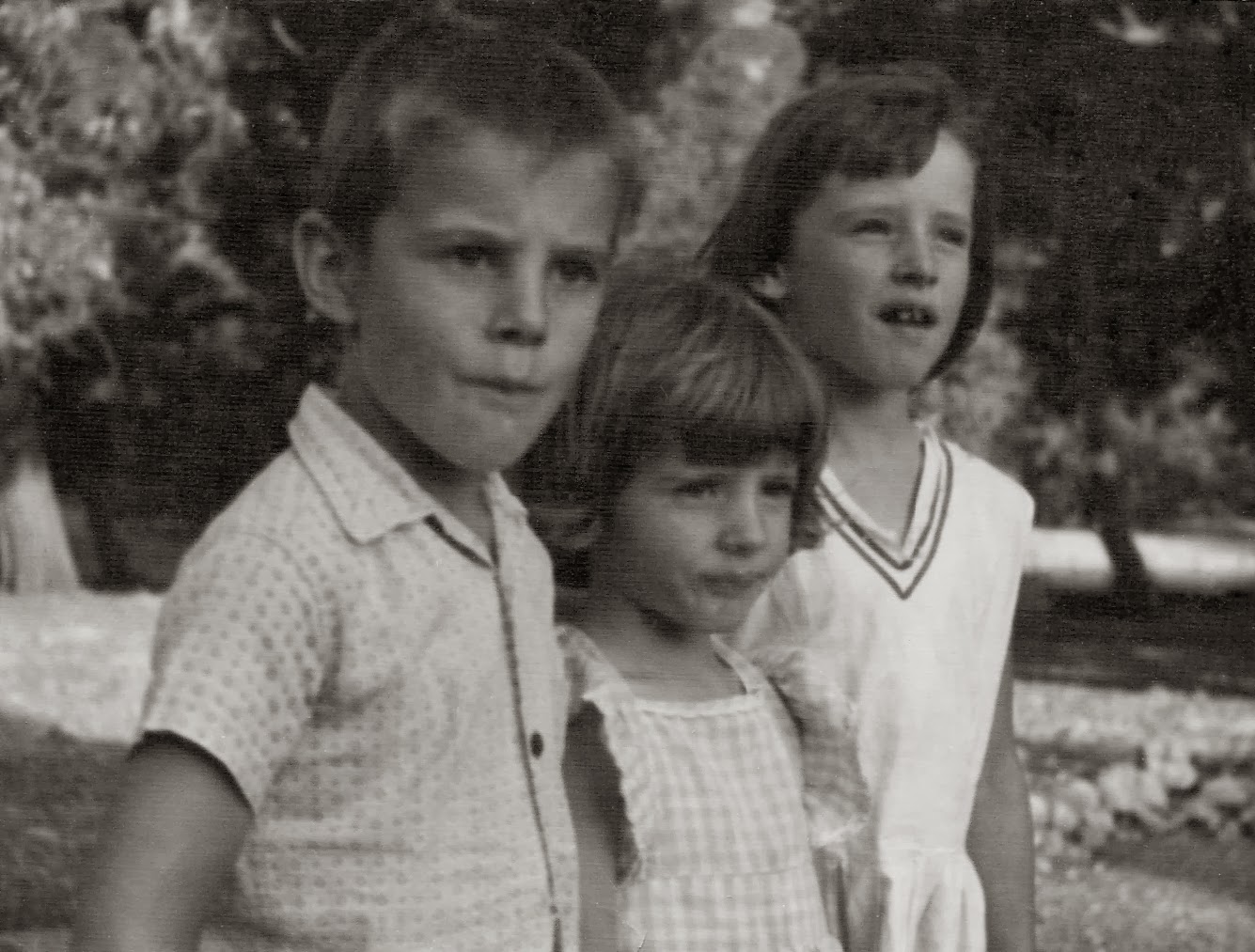 It was the place where innocence lived. The place where my sister, brother and I were a wild tribe of children, animal rescuers, explorers... where the only rule was to be home by dinner or we wouldn't get to eat... before the Bat Massacre at Pieta Creek*, before we sought the fences and greener pastures in the suburbs of Seattle and then Ellensburg, before our family structure crumbled and before I learned the secrets I would keep from myself.

My grownup self knows that our world had to change. My parents weren't happy. But the child trapped inside me still cries at the ending of Mrs. Doubtfire.

*The Bat Massacre at Pieta Creek was when my uncles and grandfathers came together and killed as many bats as they could by sweeping them out of the attic and throwing them against the front of the house until the pink plaster siding was splattered and stained with rivulets of blood and the ground surrounding our front door was black and red welcome mat of mangled bat bodies. Some people believe that bats are a sign of goodness, health and luck. When things go wrong, it is said that the Bat Medicine is gone.  http://symbolism.wikia.com/wiki/Bat