Does it seem odd to anyone else to drive halfway across one farming state and only see two different crops? 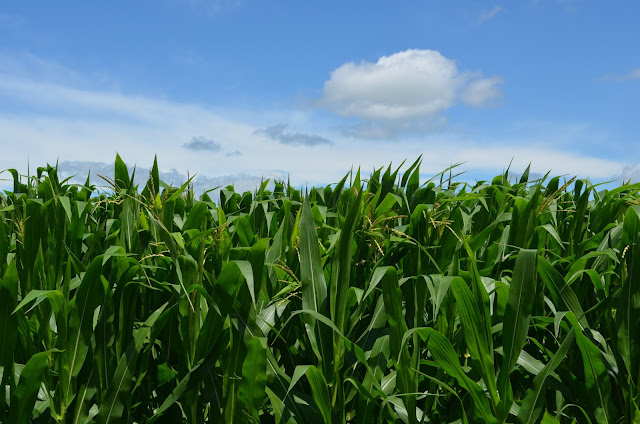 Recently, my daughter and I went to Iowa and while we were there, we saw some lovely scenery, historic sights and a whole lot of corn. Scattered throughout some of these massive corn fields were smaller crops of soy beans.

It was pretty amazing to me, growing up in a farming community like Ellensburg I saw a diversity of crops from corn, alfalfa, hay, wheat, cherries and apples. I never really thought about how a farming state could become singularly motivated, so while I was in Iowa, I learned about corn. 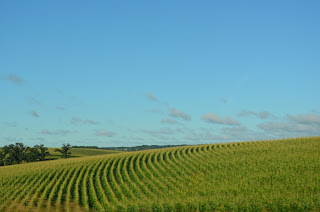 I already knew a little about subsidies to farmers, but I needed a lot more information. Following, is a very brief and somewhat vague version of the subsidy program in a wild walnut shell:

The subsidy programs give farmers extra money for their crops and guarantees a price floor... meaning the price will not drop below a predetermined price, ensuring farmers can continue to survive during the leanest of times. This sounds like a pretty good way to keep farmers farming so they can continue to feed the masses.

The top three states receiving subsidies are Texas, Iowa and Illinois. Iowa recieves 9% of its farming income from subisdies.  "The Total USDA Subsidies from farms in Iowa totaled $1,212,000,000 in 2006." Wikipedia. (This represents 2% of the state's population that continues to farm.)


Today, as it turns out, Iowa farmers are getting rich. The corn prices have skyrocketed, and consequently, the subsidies keep coming because they are not dependent on how high or low the farmer's income happens to be at any particular time. What matters, is that the subsidies keep the farmers farming so the Agri-Business thrives,  corn additives can continue to lure shoppers to market for high calorie packaged food, cattle can consume more corn-feed, and ethanol can keep engines running.

Also, another side benefit is that the U.S. can sell more crops and be more competitive in the World Market, thus making it difficult for farmers in developing countries to attain economic growth. As you may have guessed, the U.S. Agriculture Subsidy Program is very controversial. (I do not guarantee the accuracy of my facts.)

Back to the Corn! What you see in this picture is the plant that is cultivated for next year's corn feed crop. The top of the corn stalk is called the tassel. This is the male part of the plant. The ear is the female part.

While we were learning about corn, the kids in Central Iowa, were already shoulder-deep in the De-tasseling season. What happens during de-tasseling is that the tassels of the crop are removed and then every other row is pulled so that alternating rows contain a male plant with tassels in tact and a female plant containing ears. The silk grows out of the ear and is pollinated by the tassel. This tiring job can earn the de-tasselers about $12-15 per hour. (Thats better than some graphic designers earn after years of expensive un-subsidized education.)

De-tasseling was primarily a line of work filled by the children of the community but as times change, the kids are opting out, forcing farmers to hire seasonal workers. This change in the workforce then has implications and impact on several other interesting and controversial subjects such as migrant farm-worker's conditions, corruption, undocumented workers, minimum wage, and labor disputes. (Fodder for another post, I am sure.)

Anyway, back to America's crop, the tassels pollinate the ears and voila, up to 1000 embryos can be created on each ear of corn, thus creating the seeds for next year. So this cornfield like many of the fields we saw while traveling through Iowa, were planted just to make seeds in a cross-pollination process that most likely was genetically altered in some way to become a super-all-powerful-death-defying-uber-amazing corn plant. 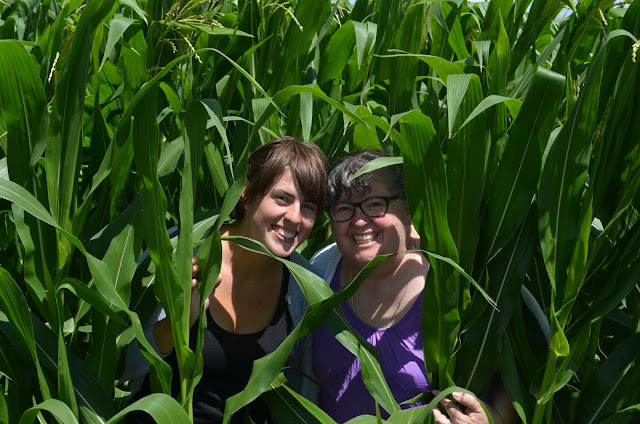 Just look at these stalks. They were all so green and thriving that it was a little weird. Field after field as far as the eye can see. It really was a beautiful sight and I found myself wanting to sing our National Anthem on more than one occasion. Instead, Courtney and I ignored the "No Trespassing" signs and stepped into.... a cornfield!

I would like to point out, for the record, nothing bad happened in our cornfield. I have heard that "nothing good happens in corn fields." 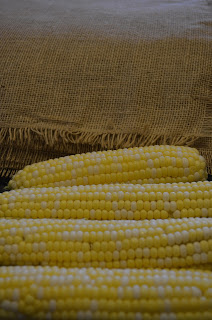 The best fact I learned about corn came from our friend John. "Each kernel on the ear is represented by a strand of silk. If the silk strand gets damaged, it will create a hole where the kernel should have been."

Question? Have you ever wondered why some kernels of corn were collapsed when you peeled back the husk?

Now you know. I love this fact. It made me very happy to learn this little bit of corn trivia! This info, although important to a farmer and genetic engineer, is not useful to me which is why I will remember it forever. Thank you, John.

I had a great time in Iowa. We spent some time with friends, which was really the best time and we learned quite a bit about the state of our ancestors.

I was able to help Joan a bit with her wedding plans for her daughter who will be married later this coming weekend, which brought to mind my daughter's wedding that we celebrated a few days ago.

Some of the sights that will stay etched in my mind: The wild walnut trees and beautiful purple flowers growing in a field near burial mounds that made me pause, feeling sadness for the extinct Indian tribes of Iowa.

Near the Iowa River I saw amazing vines growing from the trees and walked across the muddy water on an old train trestle while intoxicated inter-tubers floated below.

Our friends shared, their families, the fruits of the garden, love and prayers.

Our friends in Grundy Center and Steamboat Rock are the BEST!

As I sit here in my home, drinking a glass of my favorite wine, I offer a toast, and a team meeting to our friends. Have a joyful celebration this weekend and thank you for the wonderful memories. Good times.